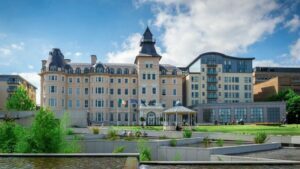 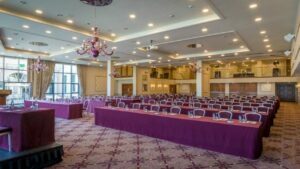 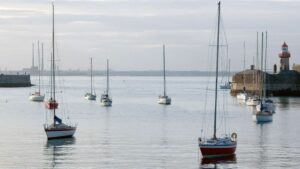 The Royal Marine has direct access to Dún Laoghaire Promenade and Pier. It boasts a health club, spa, indoor pool and air-conditioned rooms with free Wi-Fi. There is a DART train line just 2 minute’s walk from the Royal Marine, which has regular services to Dublin City. From outside the hotel there is a coach service to and from Dublin Airport.

There are plenty of beautiful coastal and countryside walks, including Peoples Park, in the immediate vicinity. Free parking is available at the hotel. Notable former guests include Charlie Chaplin and Queen Victoria.

Click here for a 360 view from the Royal Marine Hotel.

How to get to the venue?

A coach service is available from Marine Road, only a 2-minute walk from the hotel, to/from Dublin Airport, taking approx. 40 minutes. You can buy a ticket directly from a company representative at the airport arrivals stop at Dublin airport or alternatively you can purchase one from the driver when boarding the Aircoach at any of the stops. The Aircoach Dublin Airport stop is located just outside the Arrivals Halls at both Terminal 1 and Terminal 2. For further information check out www.aircoach.ie

The DART runs every 5 minutes during rush hour periods and every 20 mins during the day from Dublin to Dún Laoghaire. The journey offers stunning views of the South East Coast. Irish Rail is the national rail service and operates a regular service throughout the country. The DART links up with Irish Rail at Connolly Station, as it does with The LUAS tram service.

Dún Laoghaire is serviced by Dublin Bus. The terminus is located at the DART station. Night link services run every hour on the hour from Trinity College between midnight and 3am.

Address to reach by car:

We use cookies on our website to give you the most relevant experience by remembering your preferences and repeat visits. By clicking “Accept”, you consent to the use of ALL the cookies.
Cookie settingsACCEPT
Manage consent

This website uses cookies to improve your experience while you navigate through the website. Out of these, the cookies that are categorized as necessary are stored on your browser as they are essential for the working of basic functionalities of the website. We also use third-party cookies that help us analyze and understand how you use this website. These cookies will be stored in your browser only with your consent. You also have the option to opt-out of these cookies. But opting out of some of these cookies may affect your browsing experience.
Necessary Always Enabled
Necessary cookies are absolutely essential for the website to function properly. These cookies ensure basic functionalities and security features of the website, anonymously.
Functional
Functional cookies help to perform certain functionalities like sharing the content of the website on social media platforms, collect feedbacks, and other third-party features.
Performance
Performance cookies are used to understand and analyze the key performance indexes of the website which helps in delivering a better user experience for the visitors.
Analytics
Analytical cookies are used to understand how visitors interact with the website. These cookies help provide information on metrics the number of visitors, bounce rate, traffic source, etc.
Advertisement
Advertisement cookies are used to provide visitors with relevant ads and marketing campaigns. These cookies track visitors across websites and collect information to provide customized ads.
Others
Other uncategorized cookies are those that are being analyzed and have not been classified into a category as yet.
SAVE & ACCEPT